This book is dedicated to the brave student who called me up to say, “Mr. McAdoo, I am like you; I am gay.” In the days following this declaration, we talked about what that meant in the context of his school, and ultimately his struggle with his sexual orientation led him to stay at home unresponsive, depressed, and afraid to go to school. I was unable to convince school officials that we, as educators, were responsible for playing a role in validating this student.

This book is an apology and acknowledgement of the suffering that students endure when we as a community of teachers and leaders ignore and deny the existence of lesbian, gay, bisexual, transgender, and questioning youth. Today that student is a proud openly gay man. I celebrate and honor him—and others like and unlike him—with this work. 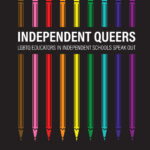 William: “I knew in first grade that I liked boys.”Books